The derby format for this weekend included dressage, pace and xc (no stadium) and riders could pick three options. To be eligible for year-end awards, one must include dressage as one of those three. I chose dressage and two xc rounds feeling confident enough not to need to do pace this time. 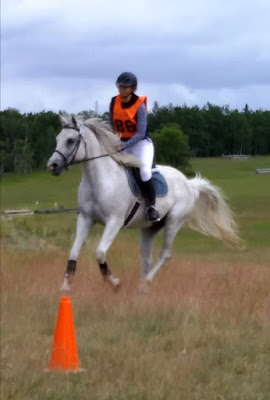 I had a lot of time after my dressage to relax, change, lunch and beer. I hand walked Savvy around to eat grass and really couldn't wait for my turn at the top of the hill. The course this time included some jumps I would find quite challenging to gallop at. I was torn between two thoughts: One, I could just go around them and resolve myself to having a fun outing despite disqualification. Or two, I could try the jumps. The ever-optimistic part of me was pushing me to remember that magical feeling last month on course. Savvy had really gotten into the game once on course and became a lot more brave than she would be otherwise. Maybe that would happen again and we could sail over the jumps I was worried about? 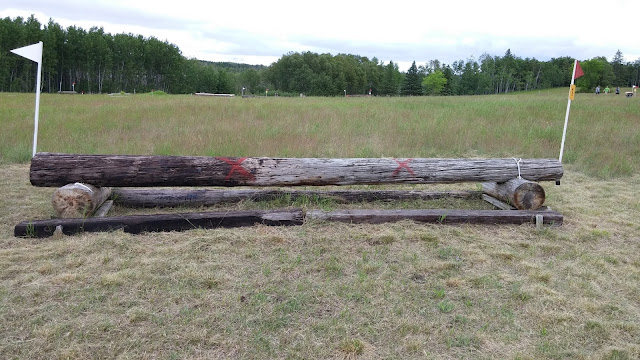 Jump 1: Nice friendly old log jump, only made slightly intimidating to me by the width of those ground poles. Savvy reluctantly left the start and proceeded to zig-zag down the hill like a drunk platypus (trying to turn back because she did not want to leave the other horses). The first jump resulted in a stop-and-pop special that unseated me so bad I fell on her neck. Err...no big deal though right? I was sure we would get into a groove soon. I sat up and got her cantering for the next fence.

Our second time out it went much better and Savvy over-jumped it by a few feet. 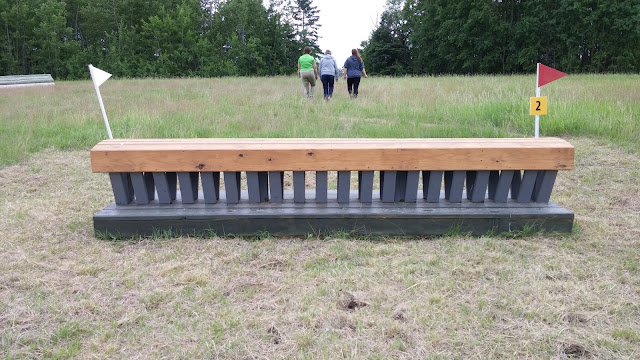 Jump 2: Large-AF feeder. Cantering up to this I thought, well...I am doing the course twice. Maybe this time I will just go around and let my face recover from the jump 1 smash up...

Second time out I thought I was GOING TO JUMP this. Savvy said no. Three times. So then we carried on around it. 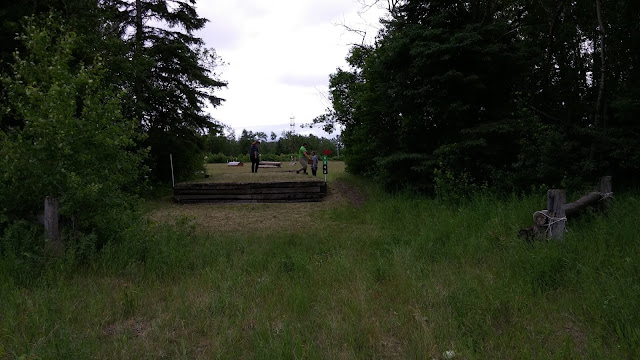 To get to jump three we had to go through the bush to the right of this ramp jump. ﻿ 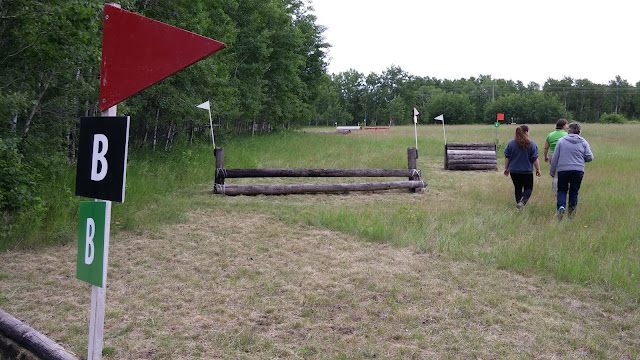 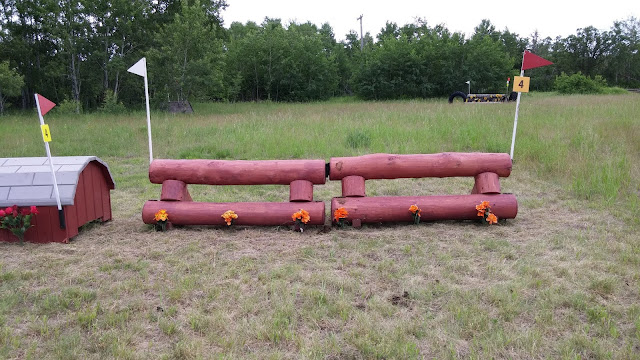 Jump 4: This was named the raspberry jump and it scared the crap out of Savvy. I actually thought it looked pretty basic. We made it over the first time with some encouragement, but the second time out, Savvy decided at the last second she would dive right instead of over and took out the red flag. 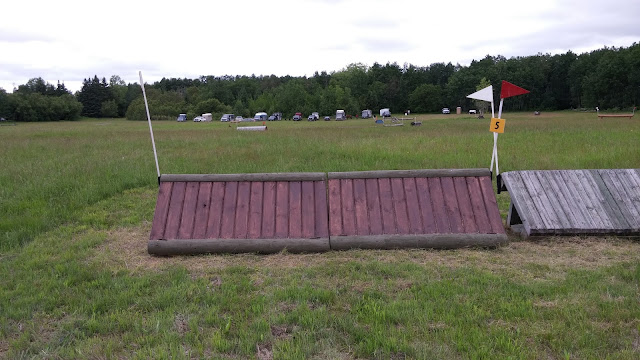 Jump 5: This jump had actually scared me at the previous derby. It was not on our course last time, but it was in our practice the day prior and Savvy had seemed worried about it. I even ended up building something at home that looked like this one to practice with. Our first round this day, she did it very well, but the second time out I was so discombobulated from the duck-out Savvy had done at the raspberry jump, I decided to just go around this one and regroup. 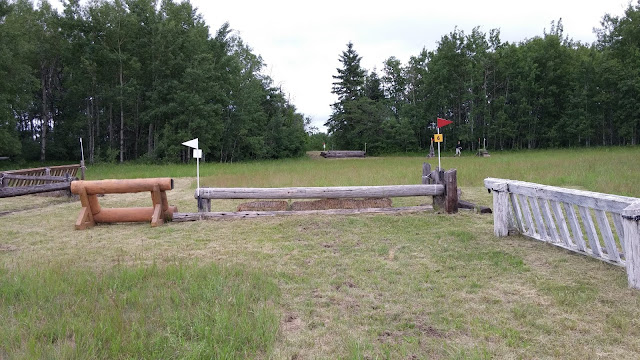 Jump 6: A jump like this was so welcomed by this point. Thank you for being simple, #6. 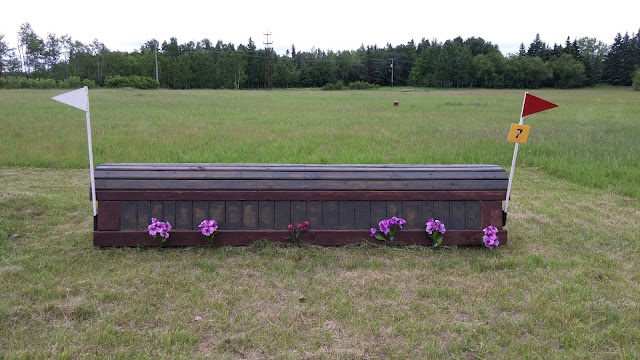 Jump 7: This may not look very big, but just like jump #2, Savvy does not seem to understand how to answer a big, solid question like this yet. We decided to just go around this one both times out. 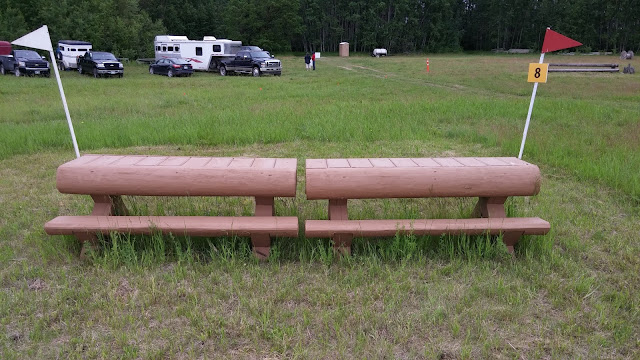 Jump 8: Are you fecking kidding me?!!  <:(    This is PRE-ENTRY people! I am not even entering. I could have sat down and had lunch at this beastly bench. No and no. Went far around it both times. May have given it the finger in passing. 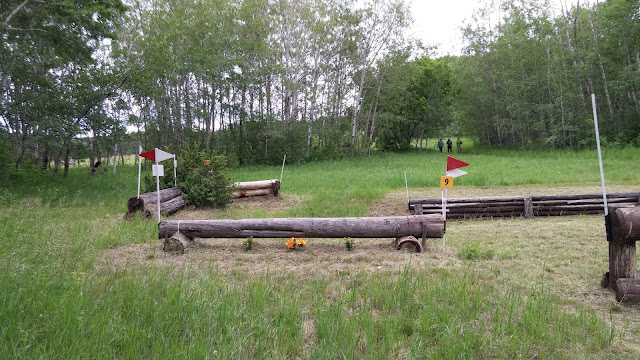 Jump 9: Now something Savvy and I can do!! We walked peacefully over this log both times, down the bank and off into the field for our last jump. 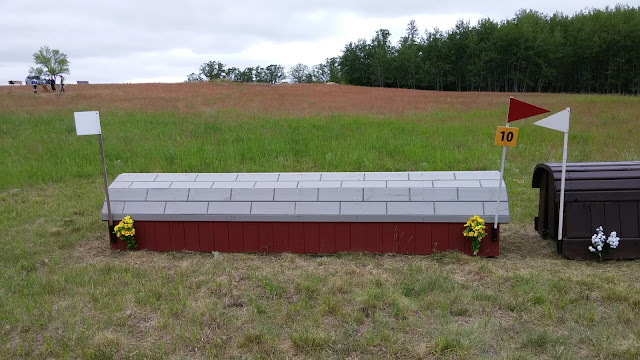 Jump 10: Of course it is the fecking barn. No. just, no. Went around it the first time, and attempted it once the second time because I am a glutton for punishment. Savvy refused once and I decided to call it quits. I galloped up the hill to celebrate, cry, take stock and pat my grumpy pony.

1. This course was a bit too challenging for pre-entry level by many of the experienced riders' standards who were there that day. That made me feel somewhat better for not quite being ready for the size and style of jumps we were presented with.

2. I know solid and wide structures like the feeder and barn are tough for Savvy mentally, so time to build more things like this at home and get practicing.

4. Savvy is a great little horse. Even when she doesn't want to try, or has hormone issues turning her brain to mush, she is still a reliable girl that I feel safe on and can have fun with while failing at all the things!
Posted by LandofWOZ at 10:01