One major issue I have been trying to work through with Savvy this summer is consistency on the contact.

﻿
The connection issue has been a bit of an overwhelming challenge. She is so light and reactive it feels like any wrong move on my part has her high and hollow or curled in behind the vertical, but mostly bouncing back and forth between the two every step of the way.

I feel like I have tried everything. The best piece of advice I have picked up is that it is not about the head.

Furthermore, correct the movement and the head will follow. ugh.

Back in the good old days as a kid showing ponies, it was all about the head and pulling it in. False collection was where it was at, and no one new it was false. Easy peasy.

No more my friend. Now it has to be straighten the shoulder. Encourage the back up. Stay soft yet tall - think uphill. The horse will round. The poll becomes the highest point and your horse will be using their body to the fullest.

Or...we pogo-stick around the arena hollow-backed and nose out. sigh.

﻿ Most rides feel like there is no improvement happening. The small details can get intensely frustrating but then something will happen and it reminds me of how far we have come. Like young Shiraz bolting suddenly and taking off bucking/galloping in the barnyard while I am working on canter departs on Savvy and she doesn't lose her mind. Or riding out to the field for a relaxing ride and it actually is because we are really starting to trust each other.

Connection is going to happen. It already has in so many other more important ways.

A Study in Transitions

I have been poring over the Karen Rohlf training videos in her video classroom searching for all things transition related. Savvy and I have been in a bit of a see-saw pattern of her being either too reactive and me tightening instead of relaxing or her shutting me out and me being too quick to skip phase 1, 2, 3, and going straight for phase 4 and feeling like a terrible rider.

I knew that I needed to step up my game and be more aware and thoughtful in my reactions: soft, consistant and proactive instead of reactive.

There were many videos I found helpful, but specifically the December 2014 video titled "Walk canter walk transitions" left me wanting to run out to the backyard and start practicing.

First, the concept of preparing the walk (or trot in my case) to the point where you do not have to push for the canter. This involves creating an active walk that is engaged and capable of doing what ever you ask such as half pass, or shoulders in, extend or shorten. Once your horse is in this actively engaged place, the canter transition will be more physically and mentally possible without running into it or flailing - both of which is my current state of affairs.

Karen talks about the balancing act of creating enough energy for the horse to physically be able to move into the canter, yet relaxed enough to be soft, using the correct muscles and not getting stiff or rushing.

I have ridden three times this week focusing on not just getting a canter, but spending a bit more time on thinking about the quality of each gait and playing around with my position and seeing how it affects Savvy's way of going and attitude.
﻿﻿
In my playing around I found some facinating things that would happen. First, when I would sit up tall and specifically look at a point ahead of us rather than down at her (um, yes like we all know we are supposed to...), Savvy seemed to have an easier time with difficult tasks like shoulder in. I am not quite sure at this point if it is a result of me consentrating more on my body thus resulting in a better ask, or if her usual 'not quite right' just simply looked a bit better out of my peripheral vision...

﻿ Second, as I was looking up and feeling my seat bones and concentrating on using my inner leg rather than the back of my calf, I could get a much more active walk and the transition into trot was improved. This is all stuff I have been working on already, but I was really tongue-sticking-out type of concentrating on it for these rides.

Third, I found when I opened my hands a bit wider and higher and paid attention to keeping a following contact no matter where her head moved, Savvy was much more willing to reach into the bit and stretch over her top line. This resulted in a longer stride and a general feeling of more relaxation.

So then for canter, I tried so, so hard to keep myself unchanged in the ask. This is so hard for me. I want to tighten the reins, lean forward and chase - ugh.

After about three attempts, staying quiet and regrouping, I had the best canter depart from Savvy she has ever given.

Don't you love it when training advice works?

The Big Day for Shiraz

After a rough past few weeks of stress coming from all directions, a sweet dark bay horse seemed to be just the thing to take my mind off of my troubles. 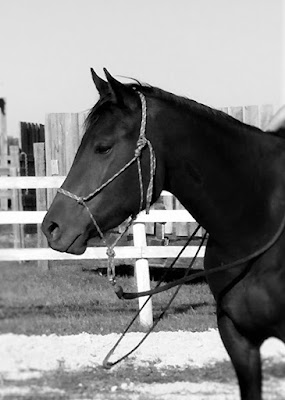 Wednesdays are lesson days where I trailer over Savvy, but this time I asked if I could bring Shiraz along instead.

I have been wanting to take her over to the indoor all summer and it just never seemed to work out.

She loaded sceptically but politely and proceeded to paw while I loaded up the kidlets in the truck. On the highway she was a saint - I didn't feel her move a hoof the entire way there. Refreshing difference from Savvy who trailers like a wind-up monkey toy.

Once there, she had to stand in the trailer while I took my equipment and kids up to the barn and she was fantistic. No pawing or stomping around. Her walk up to the barn was a bit snorty, but nothing terrible and then we headed into the barn for grooming and tack up.

﻿
I brought my saddle, lounge line and horsemanship stick. My plan was to do a full groundwork sesion with the saddle on. I wanted to give her a positive first outing with tons of carrots and keep her focused on me to show her I was her leader no matter what was going on around us.

She was a star! She was interested in her surroundings, but completely capable of focusing on tasks and calm about the whole thing. Coach was there so after half an hour of awesome, I asked if she could give us a mini lesson and I hopped up! 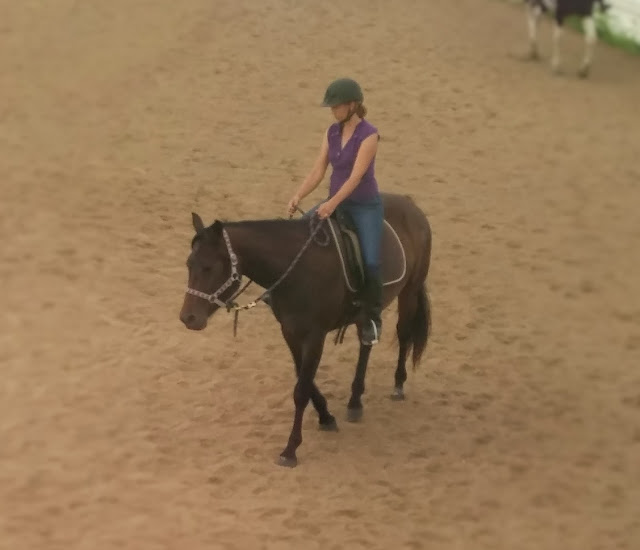 We did simple small circles, figure-eights, stops and turns on the forehand. 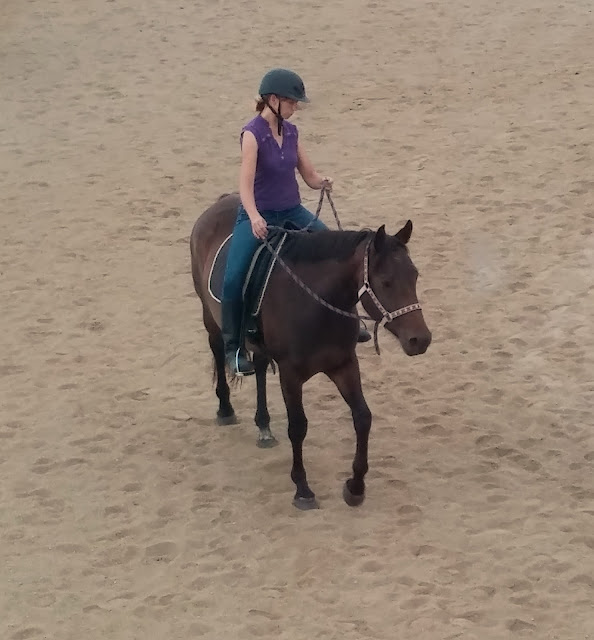 If this is how she is at 3 years old her first time on an outing, I do believe I have one amazing horse.

Letting go of a heart horse is no easy feat. My heart hurts. 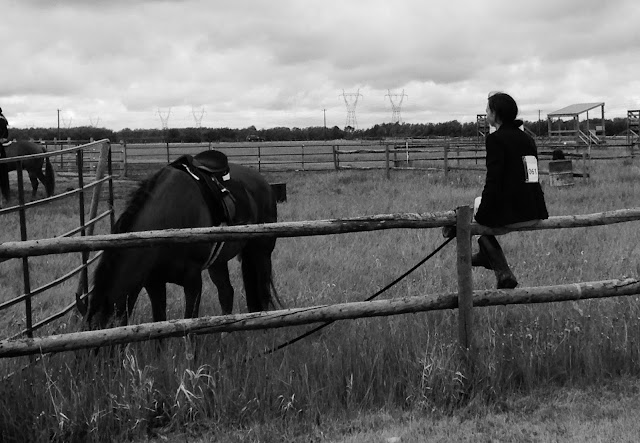 Miss Tea was my 'Babygirl'.

When my husband and I first bought our little farm, I rushed back in to horses and bought two geldings. Little did I know what we were about to face.

One of the geldings had a problem no one knew about - There had been an infection in his gutteral pouch and had left the main artery damaged and prime for a bleed at any time. Two months after I purchased him, that happened and we lost him.

Now in a position of needing a companion for the other gelding, the search began. I was adamant to be more careful this time. No hidden illnesses or dealing with other people's bad training, I wanted a weanling I could raise and train myself. And what better place than the breeding farm where my mom got her Quarter Horse mare from when I was a little girl?
﻿﻿﻿﻿﻿

So we found our Miss Tea there.
She was there through my struggle with anxiety. We walked through it together and both came out better on the other side.
﻿

She was my teacher. I learned to listen to a horse from her. Although I had ridden all my life, it had always been about what I wanted. The idea that you 'make' your horse listen was the common training approach I grew up around.


Miss Tea forced me to stop, see her as a being with actual thoughts and opinions that mattered. There could be a conversation if only I slowed down to listen and partake. And what a fabulous conversation there could be! This opened the door for me. The more we learned together, the lesser my anxiety became.

She saved me in so many ways. 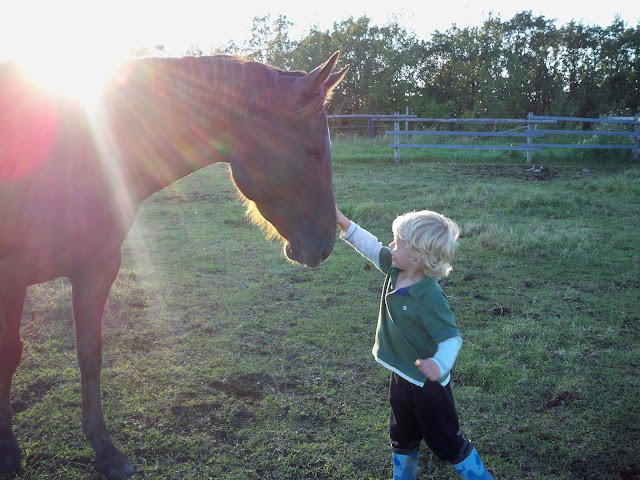 But she kept telling me something that I did not want to hear. She simply could not take the shape of my hunter/jumper dreams. I tried for so long to help her reshape her body, build different muscles to hold a frame and canter without tripping (*sigh*).

Last fall I finally came to terms with letting go of that dream and I was okay with it. As the weeks of not riding her turned into months I could see this may have been the best choice for us, but was there something out there better for her? Was a life in a rectangle pasture good enough for her?

I made an add for her and posted it several times, and several times promptly took it down before anyone could respond. ﻿﻿﻿﻿﻿﻿﻿﻿

Then, three days ago I placed another add, more plain than any of the previous ones, with just one picture and a brief description. And someone responded immediately. Shit.
﻿﻿﻿﻿
A young woman, with her neighbour who was going to help her with learning to ride. She just wanted a horse she could ride in the field and help him with cows, trail ride, toodle.


﻿﻿﻿﻿﻿﻿A life without collection and correct leads and letting her be long and straight and happy? Hu. Maybe.
﻿﻿ I handed her Miss Tea's lead rope and I was walking away from them both to get the brushes. I looked back over my shoulder and the lady laid her head on Miss Tea's side and wrapped her arms around her. Hu. Possibly.

I told them more information about her than anyone would ever want to know; how she likes to stop, look and think when she is worried and this works best for her, where her favorite scratch spots are, how much she hates being out in the rain, and her favorite treats.

﻿
I was passing on to them my dearest friend.

I hope it was the right decision.