Savvy and the 'c' word

We did it!  After a whole summer of prep (avoidance/fear/lets just walk/trot for ever!) the perfect opportunity presented itself to finally ask for canter.

We all know I have serious baggage around the 'c' word from a two-year long shit storm of canter problems with Miss Tea. We also know as riders we can't carry baggage around and place it onto other horses, but fear is a difficult thing and if it were so easy to set it aside, I think a lot more people would be trying bungee jumping.

But as I said, the perfect day presented itself - warm, no wind, happy calm pony, and months of great walk/trot work, so I decided it was The Day!
The very first try was lovely! Attempt #2, 3, and 4 resulted in crow hopping -- not excessive or difficult to ride out of -- and attempt #5 she cantered well again so I left it there on the good note.

My magical wonder pony is the joy of my life right now. What started out as a side project of training a little grey mare (when I could find the time) has now turned into a full-time passion and I am finding myself lying in bed pleasantly ruminating previous rides. 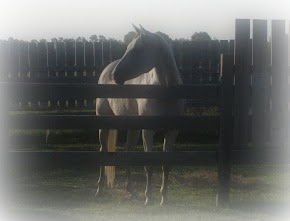 Having found an exceptional dressage coach has definitely been the key to bringing Savvy so far this summer. C is a kickass horse trainer and gets the best out of a horse the long, hard route of careful and correct training -- no shortcuts allowed. But on top of this, she also shares in my belief that above all we need to care about our horse's experience and shape their training to be interesting and fair.

Our last lesson was quite a test for wonder pony. It was cold, windy and raining and we were the only ones in the arena. Spooky mare was spooky. Luckily she is far less spooky in trot so after a few minutes of white-knuckling it around at a walk, C had us get right into trot work and we both relaxed a bit. There were still spooks, but short explosions were immediately redirected into forward and back to work with not too much difficulty.
﻿
﻿
Our lateral work has been amazing as of late, but this night she was a bit too nervous to get soft and I found it very difficult to get her haunches moving with her forehand. Instead, she would often pop the shoulder and curve her neck to the inside too much. C was trying very hard to get the concept "when in doubt, release" into my head. I really struggled with release on a spooky horse, but when I did, she went so much better.

After half pass and shoulders in work, C had us do a new exercise of trotting a figure-eight, except cutting straight down the center of the circle and focusing on:
1. Asking for the change of bend softly but timely.
2. Straight like its my job on that straight line.
3. Keep her shoulder from falling in on the circle back.
﻿

My first go at it, Savvy and I were literally fish-tailing it on the straight line. I got my shit together though, and we steadily improved. Then C asked us to ask for walk in the straight line and then back to trot. This progressed to asking for just 4 steps of walk and back to trot, then 3 and then just 2. It was a great exercise, which seemed so simple in concept, but had a lot going on for us at this point in Savvy's training.

In a week and a half we have a dressage show! It is being held at the super fancy equestrian centre that I took Miss Tea to in the spring. We will be doing test Walk/Trot A, Walk/Trot B and one equitation class. So excited!!
Posted by LandofWOZ at 07:41 2 comments: