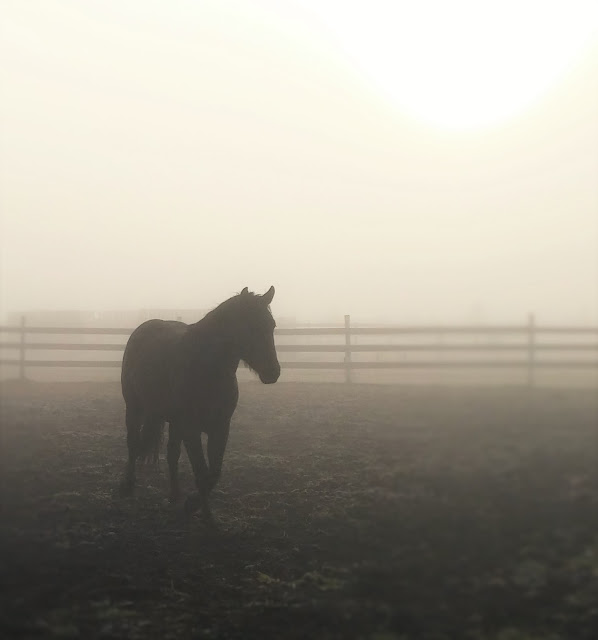 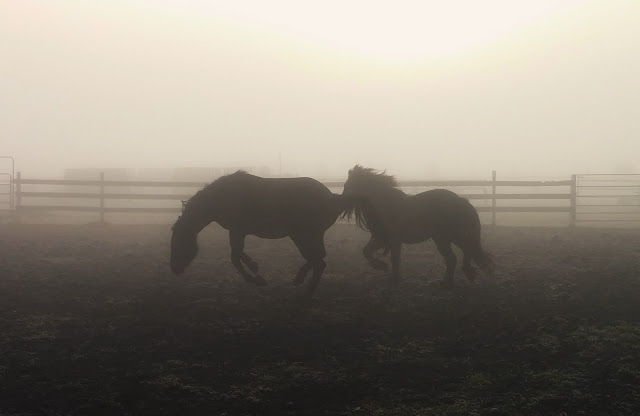 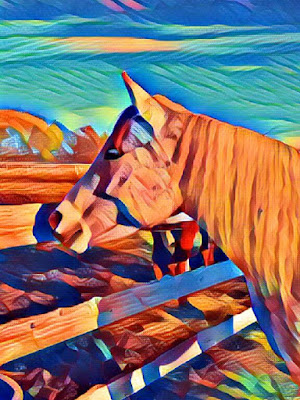 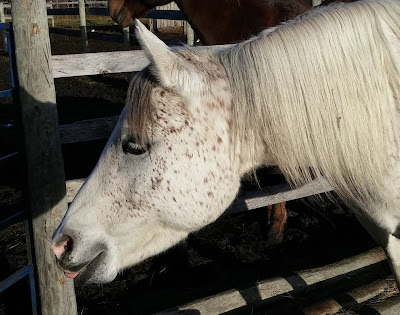 Following Sunday's accident, I really was not sure about how I would manage my Thursday lesson. We all know when something scary happens, the sooner we get back at it (whether that be driving after an accident, riding after a fall or trailer off-loading after getting kicked in the face) the better.

These things can wiggle their way into your subconscious and make easy stuff so, so hard.

So I set to planning (something I LOVE to do) and tried to create for myself a step-by-step plan for safety, just to get me through the worst of it which to me was the idea of heading back to the same place so soon in the same trailer with the same horse.

First I parked the truck and trailer in my barn yard and started ground work with Savvy in the arena, just to relax us both and make sure she was listening and yielding well in all directions. Then I moved to loading her in the trailer with the idea being that the trailer would be her rest place from working. She is really good about going in, but wants to come out immediately and fast. I would let her come out, but without hesitation, just send her right back in. We did this over and over until finally she was willingly starting to spend more time standing still on her own. At this point, I started to ask for a back-up cue. I decided to use pulling gently on her tail along with the verbal cue of 'back'. She really started to get the hang of it after many, many repetitions.

This was going very well so the next step was to close the door, give her a minute and then at a moment that she is behaving well, open the door, make her wait and then give the backup cue.

After two days (of many hours spent) on this, she still wasn't at a place in my mind I would call safe. Sure, she was doing all the things I asked but even after all of the practice, she was still acting fearful despite me remaining calm, methodical and rewarding her with tons of praise and cookies for her efforts. But it was progress.

﻿﻿By the middle of Wednesday I decided to remove the centre divider. I knew I was being quite stubborn in my head about not doing this earlier. I really wanted her to learn the straight load because I liked the peace of mind of her not being able to leap around when I am driving (like she used to do in my previous stock trailer).
I am glad I did. She was immediately much calmer. I could load her in, close the door and then go up to the front and safely tie her. I was able to walk away and let her stand in the trailer like this with no fuss. Then off-loading was easier because I could put her lead rope on and unhook her from the front tie, then she could turn around and I could get hold of her lead rope by opening the top half of the back door. Then I could open the door and easily make her stand quietly and not come out until I asked her.

With all our practicing I noticed the rubber floor mats that came with the trailer were actually slippery for Savvy. They had horizontal lines in the rubber, that although great for sweeping them clean, made it easy for her hooves to slide. So, I grabbed my large mat out of the tack shed which had tiny bumps instead of lines in the rubber and this stopped her sliding completely.

There was nothing else I could do to prepare, I just now had to do it.

It all went perfectly well! Savvy surprisingly travelled pretty quiet and off-loaded really well. Teaching her the wait after I opened the back door still worked even with the excitement of being somewhere unfamiliar.

And the lesson was a blast! We toodled all over the place and introduced her to jumps with flower baskets.  We 'jumped' (stepped over) cross rails and I was so pleased with Savvy's level-headedness throughout it all.

When ever she was unsure, she would slow down or even stop and then step over despite my best pony club kicks. It was too funny to get frustrated. She was really trying and I know from our dressage work, when she is struggling mentally with a challenge she will slow down or stop. It wasn't about refusing; she just wasn't sure about jumping flowers. Once she learned she could safely step over, she really got into it and by the end, she actually tried to jump a little. Also, once coach moved the flowers away from the middle, Savvy really seemed to be much more forward and confident. I loved how we did because no matter how unsure Savvy was about something, she would really try to sort out how to do it and never felt scared or unsafe; just confused!


Living the big life over tiny sticks
﻿
Posted by LandofWOZ at 10:01 8 comments:

No amount of careful

This post was supposed to be about my Thanksgiving Day adventure over to the large equestrian centre I was intending on introducing Savvy to.


You see, I have actually entered a show October 22nd. I know right? I haven't done ANY shows this year. And it is not a dressage show--just a super fun little Halloween Hunter Jumper show and I was gonna toodle around the ground poles class and cross rails.

I put into place a plan to prepare for my toodle show; first take Savvy over to this venue on my own and introduce her to all the sights. Second, two lessons scheduled with one of the on-site coaches to have a chance to show Savvy the jumps that will be in the show. Great plan right?

Sunday morning I arrived with Savvy and left her in the trailer while I met with the owner and paid arena fees and asked some questions. When I got back, Savvy was a tad worked up. She wanted out. As the trailer is still new to us, I have put in a lot of work to get her loading safely. The unloading is still a work in progress. Even when she is not emotional, the off-load is a bit of a rushed shit show.

At this particular time, Savvy was in full emotional melt down. In hindsight, I should have waited it out. I should have hung out with her at her head and waited as long as it took for her to settle. But I didn't. I undid her from the trailer and put on her lead rope, and then proceeded to open the trailer, thinking I just need to let her out and all will be fine. Once I got the back door open, she shot out so fast I couldn't grab her lead rope. I panicked! My horse was spinning around on unfamiliar property, close to a highway and seconds from being a loose horse. It was right there--I missed it again and again, but finally felt my fingers around rope and then, boom.

First shock. Then blood. Then much more shock. I had just been kicked in the face.

With Savvy in tow, I walked slowly to the arena, holding one hand over my nose and mouth to try to stop the blood from getting too much on my jacket.  My mind was in slow motion. I was trying to formulate a plan, but beyond getting to the arena, I was not sure. The owner was walking towards me.

Let me take your horse.
Thank you.
She can just stay in the arena.
Okay.
Come to the kitchen.
Okay.

He helped me stop the bleeding. I was so worried. There was so much blood in front of me, but I did not know yet what my face looked like. I thought maybe my nose was cut open? Are all my teeth still there. The owner assured me that my nose was not cut and all teeth seemed in place.

Next I was worried about concussion. I have had one before as a child and it was bad. I had spent two days in the hospital (yes that was horse related too!). I was waiting for the tell-tale signs to start.

During all of this, Savvy had transformed from psycho to sweetheart and was meandering the arena like an old school horse. humf.

After sitting for a while and allowing shock to subside, I found I was actually amazingly alright. My nose looked fine and wasn't bleeding any more, and my lip was fat with a few cuts inside, but nothing that needed stitches. I did have a headache starting, but my vision was clear and there was no nausea starting, so it seemed I had avoided a major concussion luckily.

The owner throughout this whole experience was just so helpful and positive. Everyone should be so lucky to have someone like that around in a crisis.

So, here I am, fat-faced and sore two days later.  My neck and shoulders hurt so bad today, I feel like, well, like I was kicked by a horse.

I have that lesson scheduled for this Thursday. Wish me luck that I can just do the thing, and not let this damage my hard-earned confidence.
Posted by LandofWOZ at 06:52 10 comments: