Shiraz, next up and coming jumping star

I have been so sick this week. This morning was a finger-numbing -20 degrees Celsius (-4 F really?). To make it worse, the horse(s) had broken three boards between the pasture dividing Savvy and the other two. 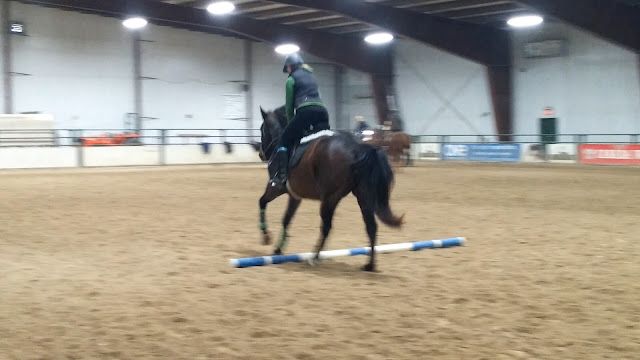 Repairs took forever because I had to scavenge the wood pile covered in snow for boards, walk back to the house for a working drill and then fix the electric wire that pulled out when the boards were broken. I guess Savvy has found new things to kick now that the pony is not in reach? Or maybe it was Shiraz kicking back now that Savvy can't get revenge.

I was really kind of in a funk and feeling so unwell. I considered cancelling my lesson but this one was going to be Shiraz's intro to jumps: I needed to ignore the freezing temps, my funk, and my bronchitis (with a lot of help from Tylenol and Benylin) and just buck up.


Brace yourself for awesomeness ;)
The lesson was made even better when a very good friend of mine asked if she could come and watch. These super fun milestones are made better with company who knows how much it all means to you.

Going into this lesson I had not ridden Shiraz for (ugh, I am embarrassed to type it!) two. weeks. Yup. It has just been too cold and busy and all the excuses. No worries, apparently Shiraz is a fucking unicorn. She was a bit looky to start off but went right to work and was an absolute sweetheart. We started off with two trot poles quite far apart and quickly moved up to cantering them in both directions.


Then out came the standards and my friend and I silently squealed like 12-year-old school girls. Hang on to your panties; this lesson just got awesome. Shiraz did not bat an eye (nor lift a leg much) at her first pass through the ground poles to a little cross rail. There was never actually the feeling of 'jumping' per se but I was nonetheless so thrilled with how she was trying to do what ever it was I was asking of her.


After trotting the line many times, C had me work on asking for the canter on the landing. It was completely uneventful and so much fun. I was really happy with the whole lesson because we kept it simple and C did not overface me or my horse. We're in no hurry right now beyond getting Shiraz out and seeing new things, building my relationship with her. I do have my overall grand plan in mind but there is time to take it slow. I have seen plenty of jump in this horse lunging over obstacles at home but I guess I will have to wait until next year to feel it for myself!