Don't you just love it when life keeps popping up road blocks that get in the way of your meticulously devised plans?

Truck is still problematic in its functioning capabilities.

Coaching was unreachable/unavailable at times I was able to ride.

No problem, I am inextinguishable.

When I finally got out last week with Shiraz and over to the indoor, she showed me that on her second visit here that the overhead door was old news, other horses coming and going were okay and rolling in sand is her most favoritest thing of all things. 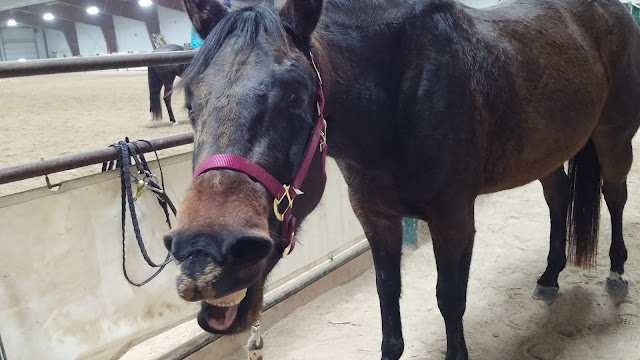 I still had no lessons arranged at this point, but miles of any kind are our friend. I started out the same as her first visit since that worked so well to set a relaxed mood for the session. I am hoping to set up an 'outing routine' that helps her feel more like she knows what to expect even when at new places. She is pretty laid back but still very young-minded and occasionally has slow meltdowns. Even though she is showing me she will probably be fine, I would rather take steps at prevention, cause that's how I roll.

So at the arena I walked her around, then saddled up and lunged. The last time I rode at the arena, it was more just to get up in the saddle and see if she would be okay. This time I was able to settle into a bit of work, knowing she was totally fine with the environment. I played around with contact and bend. She has no idea how to use her hind end yet, but as she relaxed into work I was able to encourage a much better step under from behind at the walk and trot. Circling to the right is hard and bending almost nonexistent, although I did manage to get her to soften and move off my inside leg for moments of our circles (usually in the same spots of the circle as she tensed or relaxed based on parts of the arena she was worried about).

﻿We cantered as well which was heavenly. I don't want to compare, but I will! It's just that Savvy's canter is SO much work. First of all, it took so long to get her to that point and even now that she 'knows how', it is the kind of canter that has a great deal of up and down to it and is a real workout to ride. I mean, it is a gasping for air, burning core muscles kind of ride because there is so much movement to follow. And Shiraz just steps into a smooth, gentle rocking horse canter and I could probably have tea time up there and not miss a beat.
This week I finally made contact with my coach and had our first lesson. We worked over four poles on a circle and got some great bend happening, even on her tougher side after a while as Shiraz started relaxing into the exercises. Her clumsiness improved throughout as well - after a few bad steps on poles she started to realise that paying attention to her feet was a good idea.

Pony was worked hard and near the end of the lesson I was having a hard time even getting her to trot any more. Poor girl. She's going to need some massage and stretching after this lesson.

After I got home, I realised I had spent the whole time in my lesson listening to my coach, not worrying about spooks or anything. It was such a great feeling to just sink into full concentration of my positioning, her steps and shape, being lost in the work completely.

I am hoping the weather cooperates this weekend to take her for an outing in the park. I have this grand plan in my head of getting hubby to come along and bring our dog so we can have a lovely walk in the park together, but so far we haven't been able to make it happen. Fingers crossed I can make this happen while the snow is not too deep for hiking.
Posted by LandofWOZ at 11:18