How to solve a problem named Savvy

Or alternate title: Stop hurting yourself you stupid cow.

The transition into winter has been hard on all of us. Short blustery days and dark coming far to early makes finding horse time a bit tricky, especially without an indoor or at least outdoor lighting at home. I have been trailering out with Shiraz once a week to the indoor arena. Besides that, I am able to spend some time in the backyard on my lunch breaks. Unfortunately I have been using that time to do barnyard chores that are easier done with daylight rather than riding much.

Savvy is feeling the neglect. With little to no grazing time due to snow covered paddocks, combined with less time spent occupying her busy brain with people time, she has become, er, less than pleasant to her fellow paddock family.

She has always been adamant that she should be leader and pushes our beastly little pony constantly trying to take her spot as queen 'o the land. And, she always loses. 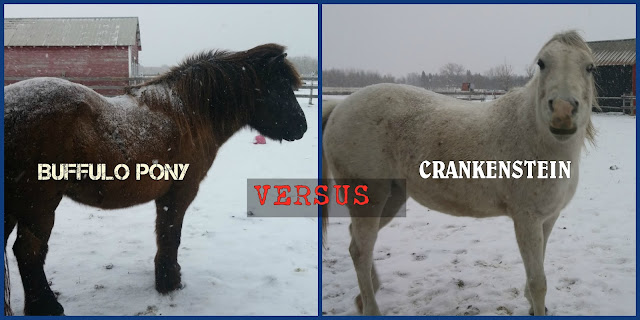 For the past few weeks though, it has been escalating to the point that every morning I was preparing myself mentally for what new cut she would have that day. The carnage was getting too much for me. And pony? Never a scratch. Savvy probably couldn't kick hard enough to get through pony's buffalo coat.

I considered putting shipping boots on her back legs at night (as that is when most of her injuries would happen), but that would not solve whatever damage she could give back. In Savvy's frustration with losing to Meyla, she would then take out on Shiraz who she is above in the pecking order.

My only solution at the moment is separating them. I don't like a horse to be on their own, but there are shelters in both paddocks and they can hang out over the fence. It is frustrating to have to separate my little herd. The paddock space the three of them had is huge and there is never a lack of food to fight over.
The fact that Savvy has to be so relentless in her pursuit for supremacy over all is problematic, but it also leaves me in awe that she accepts my role as her leader.
Posted by LandofWOZ at 08:10