I am still smiling! Even with all of real life burying me alive right now, all it takes is a peek at my weekend pictures to lift me back up.

I'm going to steal a moment right now and fill you in on the first day of fun!

As part of the Manitoba Horse Trails spring derby, participants were offered field time on Saturday of an hour and a half with either your own coach or one assigned to you. I was really lucky to be assigned someone who not only was a highly respected and sought after coach, but who I ended up doing well with style-wise.

﻿
My lesson was with three other people; two of whom were mostly inexperienced and the third riding an absolute school master. It turned out to be a great dynamic for all of us to get comfortable over little jumps and have help 'following the leader' on more difficult obstacles with the school master in our group. 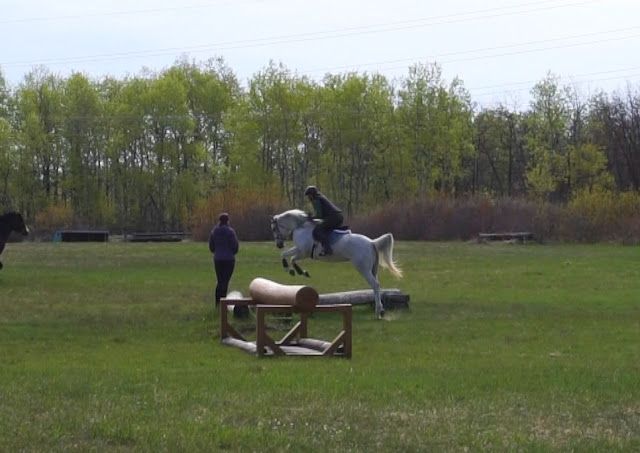 My time spent acquainting her to the park was well spent as she settled in and I was able to hop on right away and warm up with no issues at all. She was a bit up, but still had no problem moving forward and freely over her back in a steady trot and canter prior to starting any jumps.

The first jump we would try was the smallest one in the park, a large log directly on the ground. C was immediately in my good books when she asked us to first come up to it and walk over. Definitely my speed for Savvy's and my first xc obstacle ever.


Saturday lesson video of first two jumps
I felt good jumping it at a trot from both directions and then canter. My challenge at this point was to learn to sit up a bit and ride more defensively. Changing posture habits is always a difficult task, but more so as an over-thinker, I think balancing the assertiveness to commit to the jump while physically preparing for the worst will be a struggle.

After a few jumps in the first field, we moved on to a second larger field and working on some more log jumps but with the added difficulty of it being on a slope. C taught us about how to shift our legs and upper body according to ground slope and the importance of keeping our shoulders back and head up at all times.

Next was a two-tiered bank. I thought it would be easy--haha! Um, well it is not as easy as I imagined. Going up took some encouragement and coming down took a lead horse. Savvy stepped gently up when finally convinced and LAUNCHED down in massive dear leaps. We landed straight though, so staying on was not an issue at all. Her second time down was entirely different with a gentle slow-motion step down for each step.

Our last jump would be a barn. I almost typed 'adorable little red barn' just now, but really I was seeing 'huge, beastly, way too high and wide' red barn. I was shocked it was part of the Pre-Entry but C was giving me the look that I better practice it because it just might be part of my course the following day. Two of the other riders in my group chose not to even try it. The rider on the school master popped over on her massive 16'3" hand horse NBD.

I was mildly freaking out, but not entirely because of the jump. Actually, everything had been going so well up to this point I was thinking it might go well. Except this jump was at the top of the hill right beside the busy park road. None of the other jumps were. Still no big deal, except the fact that a bike race was going on and gaggles of cyclists were zipping by and Savvy was loosing her marbles from it. Every approach I was trying turned into a prancy/counter-canter/trotty/hoppy mess with her eyeballs on the road instead of the jump. How do you approach the biggest jump of your horse's life (it was 2'6" tall and just about as wide and Savvy has only gone up to 2' so far) while she can't even 'horse' her way up to it?

Enjoy this fugly moment I finally get over the beastly red barn. (Please be kind in your thoughts, it was a massive challenge both mentally for me and wonder pony).


I was so proud of us both regardless of fugly moments! Our efforts were rewarded at the end of the lesson with heading over to the water and trotting in and out, cooling off the ponies and letting them paw and splash.

Sunday would be derby day and after such a fantastic lesson, I was feeling so excited for it! (even though thoughts of a red barn in my course had me slightly concerned I might get eliminated...)