How can I even describe to you all of the excitement and happiness I had waking up to this day?!

My course walk with C would be at 8:00 a.m. and I arrived to the park with time to spare. The day before I had come back to the park after my lesson to volunteer with course setup. It had given me sort of an idea of where my jumps would be, but really with all the different levels we were putting up and doing it out of order, it was really jumbled in my head by the end and I did not know my course route. 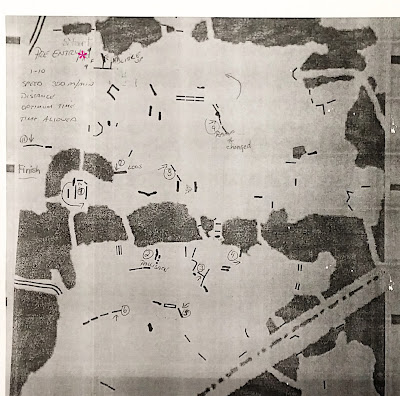 The adventure at hand - pink star is the start box
I was happy to confirm, most of the jumps were inviting logs of various sizes and numbers with a simple ditch half way through, one up-bank and the grand finale being THE BARN.
After the course walk I had plenty of time to get changed for dressage and prepare, perhaps too much time because I ended up putting off saddling to hang out with friends and hand graze Savvy. By the time I got dressed and tacked up, it was actually time for my dressage round and I ended up rushing up the hill to the dressage area just in time to not warm up, but simply circle the dressage ring and then go in for my test. She was tight and prancy, but I remembered at least where I was going and what to be doing. Honestly, it was a mess. I goofed. Lesson learned--pay attention to the time. 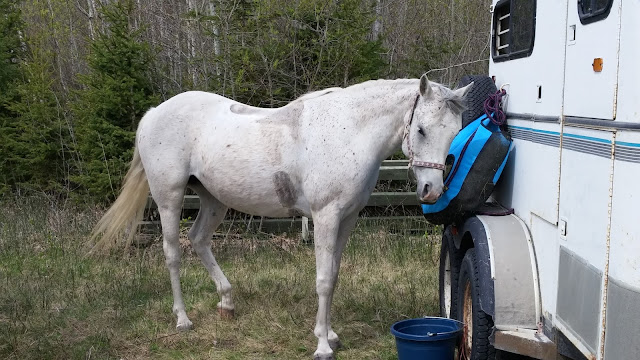 I also had plenty of time before my pace round which was after lunch. This time I planned much better and took Savvy out for a good warmup out in the field. The pace round would be a timed run of my Pre-Entry XC course, but without jumps.

Standing on top of that hill waiting for my count down was incredible!!!! I was the first rider to go and there was much 'woohooing' (mostly from me!!!--no shame!!) and I might have woohooed all the way down the hill once I started 'cause that is just how cool I am. :P

I mostly trotted around my pace round and tried to canter in some places that felt good. Coming back up the hill at the end and going through the finish was just as amazing and I had just enough time to wish my friend luck as she headed down the hill for her pace round.

I then had half an hour to catch my breath and consider running to the trailer and calling it a day before my XC round. My stomach started to flip and I was wondering how I would have the stamina to do the course with jumps, cause this sport is some serious cardio! This time I might have been a bit more quiet in the start box (and possibly a shade of green) and then headed down hill to fence #1.

﻿
This was an inviting (but a bit big/wide) jump that I had to pony club kick for a lovely hesitate-and-pop sort of deer leap maneuver.  We cantered away and headed through the bush over to fence #2.

﻿
Fence 2 went much better with no hesitation on Savvy's part and fence #3 was just as good.

﻿
However, there were a lot of spectators sitting along the trees that we did not see until coming to fence three and it was difficult to get Savvy's attention for the quick turn right we would need for fence #4.

I ended up needing to really push her to fence 4 but we made it and she was happy to head back to #5 which was in the direction of her trailer.

﻿
It was about at this point in the course that Savvy started to discover the game. It was so fun to see her little ears scanning the jumps in front of her and it was like she was seeking them out and enjoying it!

Fence 6 looked big to me in the course walk but was nbd to jump and we headed back through the trees to the ditch. This was a great moment to breathe and regroup as we walked down and trotted through the little meadow.

We got right back into an energetic canter and sailed over jump 8!

Jump 9 turned out to be the logs to the right of this ramp that had been numbered incorrectly and proved just as easy as all the rest had.
After fence 9 I turned for home with a long canter through the field and then up the hill to the tiniest of step ups for #10!

My plan all along was to skip the last jump. My thinking was that if Savvy did well with the simple course of logs, I should end on that good note for her first event. Right up until about 15 strides out, that still was my plan. I have no idea what came over me at that last moment when I decided 'f*%$# it, hold my beer--we got this!' and Savvy was game for it! We approached that barn perfectly and she flew over it like a pro.


Never could I have imagined just how fun this sport would actually be. I am hooked.

We ended up placing fourth overall for Pre-Entry. I had the slowest time in xc but my dressage score raised my placing (which I could not believe considering how bad I thought our dressage was!). Considering we cantered the whole xc course which felt fast to me, I was surprised to have time penalties. Going faster than we did is really going to take some more fitness for both myself and Savvy. The next derby is in a month and I can't wait to do it again, but this time knowing so much more!
Posted by LandofWOZ at 10:48

Email ThisBlogThis!Share to TwitterShare to FacebookShare to Pinterest
Labels: eventing