And then there were three...

As of last fall I made the decision to no longer board other people's horses and my backyard became all mine again.
﻿ Wonderful for me, but the backyard fencing that was designed for multiple separated groups was no longer needed. Also, I had a round pen that I never used taking up valuable real estate and so this spring I set to work dismantling fencing. Lucky for me, I enjoy working on fences almost as much as riding. Am I strange? Yes. But the work is just so satisfying. I would think it is much like the enjoyment people get from interior design - creating a layout for form and function and seeing the beautiful end result. Then add on the fabulous feeling you get from a hard day's work. Now if only my hands would hold up to all the abuse. I have been suffering with tendinitis since March when I began dismantling fence lines.
﻿
There is more to do, but at this point I have the round pen down as well as the paddock fence line that was along it. Now I have a massive arena which allows for so many options with jumps and open space to still do flat work. Next I will be taking down some of the paddock divisions and upgrading some of the fence lines that might not keep my Houdini horse Shiraz inside the fence (she has no fear of limboing her way through wire).
﻿
﻿ I have also started working on making cross country jumps, but trying to come up with lighter, more portable options so I can change things up easily. My first fence completed is this ramp style jump. It turned out not too bad--I can lift it and it simulates a ramp jump nicely.
﻿﻿ However, I did not get to test out the new jump this weekend because of sore ponies. My horses had their spring shots on Friday and both Savvy and Shiraz had neck swelling mixed with mild flu symptoms all weekend. Poor ponies, but today both are much improved so I think after a few more days off, I will be back to riding again.
In other news, I was fortunate enough to sneak away from husband and kids to take in a couple hours of an eventing clinic at the Birds Hill xc park. The clinician was Chelan Kozak who has competed for Canada in the Olympics. 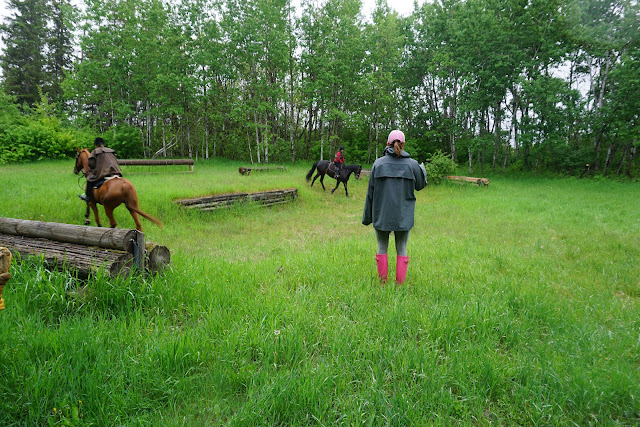 A friend of mine had a spot so I went to audit. Despite constant light rain, it was a great clinic. The group I watched were all at an intro level so the basics of body position as well as the importance of line and pace were covered. I really had wished I could have brought a horse but couldn't afford it at the moment. Auditing was quite useful though and I will just have to practice what I have learned at home.