Time of my life

I had the opportunity through the barn I am lessoning with to sign up for one of their jump nights. There is a lot of interest in these and there turned out to be full groups booked every hour starting at 4:00 pm to 10:00 pm. I was lucky enough to get a spot at 8:00 which would work around everything else I had going on that evening, i.e. taking my daughter to gymnastics, making supper for the crew and getting nighttime chores done early as hubby had to work late that night. 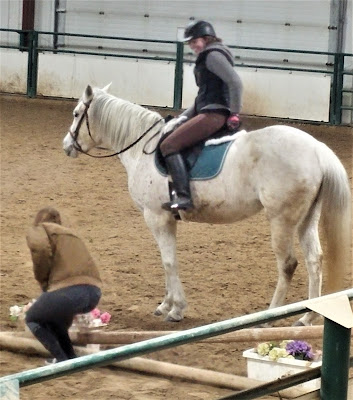 It would have been so easy to just say nope, not this time as it was all so difficult (not to mention freezing outside at -20 that day) but I decided to dig in and make it work. Savvy and I really need to learn how to jump and at this point have never strung together more than two little cross rails let alone see a full course set up in an arena!

Not only would this be good for jumping practice, but also exposing her to a more busy atmosphere with other horses and people everywhere.


I really was not sure what to expect for my time slot. I did not know how many riders would be with me or just what the format of it all would be. Upon entering the arena I decided to just lead Savvy around and let her see all the jumps/horses/people and sniff the things while I waited for my coach. The jumps were amazing and there were many different styles and colours to see. The only thing that was really an issue at first was a Christmas tree leaning on a standard, but after a few passes by it she was fine.

It turned out that this particular jump night was a bit more full than usual ones, so the organiser had to put me in a group that was maybe slightly more advanced than me. This meant no ground rails to start with, but my coach was awesome enough to put one jump down to ground rails for me to get warmed up quickly while the rest of the group started with cross rails.


Our first jump would be a cross rail following the ground rails on the outside line. Lets just say it was a total stall out as she ignored my leg and came to a stop before the jump and sedately stepped over. I had to laugh and came around again with better success the next time through.

We quickly moved on to cross rails and my coach introduced us to each jump on its own and then started stringing pieces together to build our confidence. My coach did a fantastic job of keeping us progressing and not overfacing us. She was right there at each jump to help us through and I actually never felt afraid at any point (that right there is huge for me!).


We had our first bit of trouble when the cross rails went to verticals and Savvy just really was not sure that was a thing horses could do. We had a refusal at our first vertical but again, coach was right there and put the rail down so Savvy could step over and our next go around was fantastic!

Soon enough Savvy realised that yes she could jump and really started to show a bit of spunk and became more forward. This really helped turn her hop-overs into much more fluid jumping. I actually started to feel like maybe this is all really possible and we can do this whole eventing thing in the future! She even started offering canter after a few jumps which felt incredible.


By the end of the hour I was able to piece together the entire course. For our very first time doing this, I just could not believe how well Savvy had done. Both my coach and I were blown away with how she took it all in, figured out the game and improved steadily throughout the evening.

Back in the barn untacking and going over it all with my friend who had come to watch, film for me and provide much needed moral support, I couldn't help just bursting into tears. I know a course of tiny verticals is no big deal for most of you, but I finally accomplished something I had been working towards for so long. All I have wanted was to toodle around small fences, have fun and feel safe and I really haven't up until this night. It was everything I had wanted right there and I just couldn't hold myself together finally getting it.

All I can say is I love this horse. She is not easy, but she gives back as much as I put in and truly deserves her Wonder Pony nickname.
Posted by LandofWOZ at 10:02