Little fish in a big pond

I have <mostly> been on track so far with my plans to trailer over every week to the heated arena with an actual lesson every second week. Even though it was -17 degrees today, I still managed to make myself get there. I was motivated by my plan of action which was to make the most of a big empty arena and let Savvy loose to explore and settle in while I set up ground poles to do some fun little exercises. 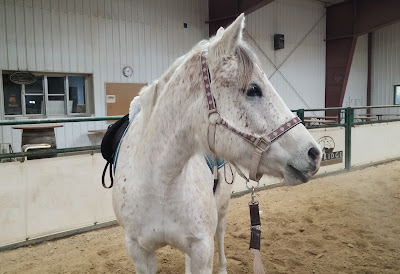 To my surprise when I opened the overhead door to the arena, there was a large group of reiners having a lesson at one end and some very fancy warmblood dressage horses at the other end. I know practising riding with other things going on is great, but I must admit my heart sank a bit.

I proceeded to tack up but decided to just leave the halter on and lead her around in the arena and feel things out a bit. The reiners were practising spins (seriously how does the horse not just fall over dizzy from that much spinning?!) and Savvy thought this was freakish behavior.

I headed down to the dressage side and although I was at least with my people, I was definitely odd horse out. Amongst the sleek massive pure bred dream horses was my filthy little fluff bum.

I picked a corner and went about some simple ground work to get Savvy's marbles organized and then hopped on for general toodling and mostly just staying out of the way.

The good news is Savvy was listening very well and staying calm even when the reiners started to do gallop/slides. The bad news is her cough came back once we started doing trot work. I knew it would probably still be around but hoped otherwise. I kept things easy for her to avoid aggravating her lungs and mostly just worked on her shape at the walk, leg yields and the like.

Next week there is a jump night that I have signed up for and I am really looking forward to it. Fingers crossed her cough is improved enough to have some fun!
Posted by LandofWOZ at 15:15