Coming into this dressage clinic I had:
Saturday morning did not disappoint. It started raining around 9:30 a.m. My ride time was 1:00 p.m. so I remained hopefull as I arrived, settled wonder pony in and sat down to read through Walk/Trot B test for the first time in a year.

﻿ By 11:00 I had to get out to warm up. It was still raining of course but Savvy was good about it, although sceptical. We had a decent warmup. Savvy was very looky - a peacock kept shreaking from a nearby farm and cars going by were suddenly terrifying for her, but overall she handled it all well in the pooring rain and never felt unsafe to ride.

A took her back to the barn for lunch and to my surprise the rain stopped (thank you weather gods!).

My goal for this walk/trot test was just for Savvy and I to get used to the venue again and I wanted to see if I could pay more attention to quality rather than just 'showing up in the right spots' - if that makes sense?

Savvy had other plans. As we came to the outside of the ring to do the typical walk-around waiting for the bell, Savvy was a bit overwhelmed by the new area we were now in, the trees with sounds of a horse banging in the barn behind them, a still distant screeching peacock and a hyped up rider on board. She was just about prancing on the spot and grinding the bit. Surprisingly, I was feeling a bit meh, what ever, lets do this!

The judge had better ideas though. She called me over and promptly suggested we lesson first, test second. Brilliant idea!

﻿﻿ I won't bore you with the details but I will say it was all very different from how I ride. I played the good student though and tried all the things with an open mind and enjoyed her coaching style. She was a fun lady that was very direct but kept a sense of humor about things.

Savvy did settle finally and our test in the end was decent. Our main issue was consistancy on the contact at a trot. (Her shoulder balance was actually good though!) This has been a longstanding issue, made worse when Savvy is nervous. Her mind can get so busy and it comes out in her body all over the place, but it is getting better. 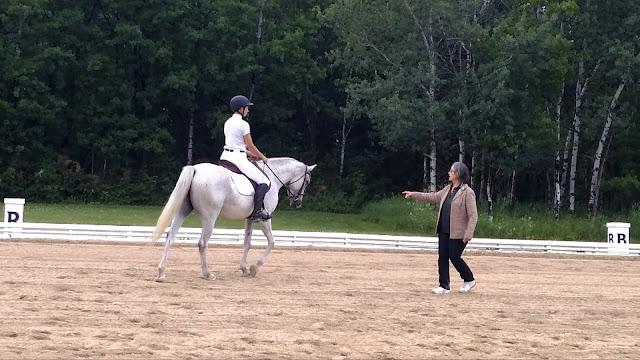 I did catch a glimpse at dressage as a competative sport and could see how some riders might end up on a path of trying to get results from the horse for the points, and just how easy it would be to lose sight of the horse's mental wellbeing.

I am a ridiculously competitive person, but knowing better means an obligation to do better. And lucky for me, my competitiveness is within myself. I know what I am looking for from Savvy and will know what a successful test will feel like for me - actual scores be damned.

I know Savvy's training is progressing at a snail's pace, but she's doing great! She is happy, healthy and we like each other. For me, that is winning.