How many coffees does it take to move this 41-year-old ass at 5:45 in the morning? One chugged like a frat partying 20-year-old and then two more as I sat drooling on myself, waiting for them to kick in.

I am not a morning person. 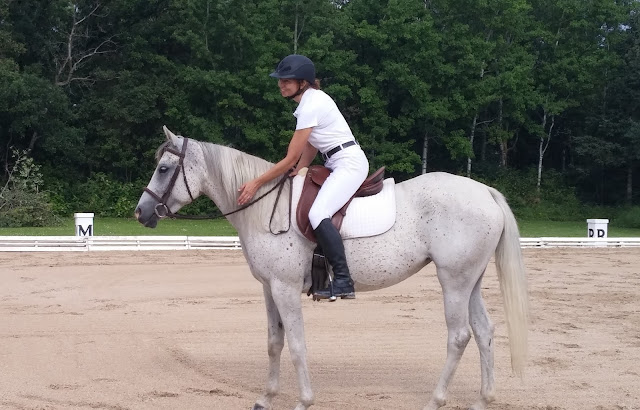 My ride time was 9:30 but I wanted plenty of time to let Savvy have breakfast, clean stalls and then get to the warmup area.

We were going to be doing Training 1 and I only half believed the cantering would happen. In our warmup Savvy was feeling much more relaxed than the day before. She was still very looky, but I can't blame her - so much new stuff to see. I really must make an effort to take her out to new places more.

I was pleased that Savvy was listening well and even canter depart was lovely - only about two strides out from my cue which is good for us at this point. Unfortunately there was no right lead. We have been struggling with it at home. I decided I would be okay with what ever happened in the test. I would set her up as best as I possibly could and if it didn't happen, try once more to get it then carry on and not get frustrated about it. 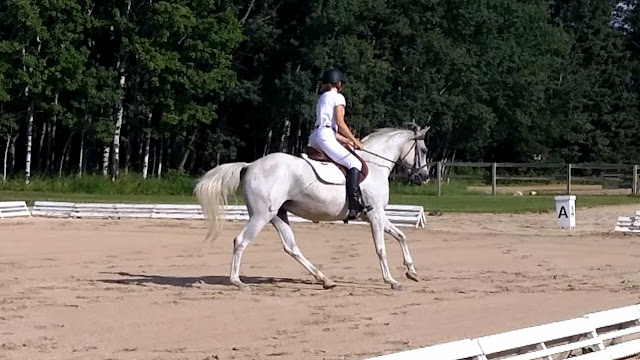 By the time it was our turn, Savvy was as ready as I could expect of her. We had a fabulous halt at X and her trot was excellent throughout the test for the most part. We had really good comments for our free walk, but personally I felt like I nagged her along for it (she is convinced walk means done working). First was canter to the left which was a bit rushed and unorganized but got it done. Then canter to the right -- she got the lead!! I was so thrilled with that I was praising her like crazy and saying 'good girl' the entire circle. By final halt I was just beaming and really felt so proud of the test.


The judge came out and had much to say about Savvy's on and off connection, which is just where we are at right now. She gave me a few suggestions and then I got to ride the test again using those techniques. Unfortunately our second ride was not as good, but Savvy still got the correct lead again going right.


Packing up, I mulled over the usefulness of such a weekend. It really was good motivation to ride more in the weeks before hand to prepare. I put in a lot of work on canter depart and transition work and the difference in Savvy is quite remarkable. Also, it is obviously good for Savvy to be at this venue as much as possible, because if we are going to show for real in the future, this is the venue they will be at for the most part.


Finally, it was good to open my eyes to the reality of dressage where I live. It is a competitive sport and there will be training and riding techniques I disagree with, not to mention judges who favor those techniques. I need to stand firm in my own methods and remember to put Savvy's wellbeing first. She has a natural talent for this sport and I think if I keep training on the path that I am, we can really do well.