A Little of This and That

I have been on a bit of a riding holiday these past few weeks. There is an event coming up that I would have loved to attend but it overlapped with our pre-booked family vacation so I will sadly be missing it. Instead of riding, I have been busy with a never-ending hay-making saga. 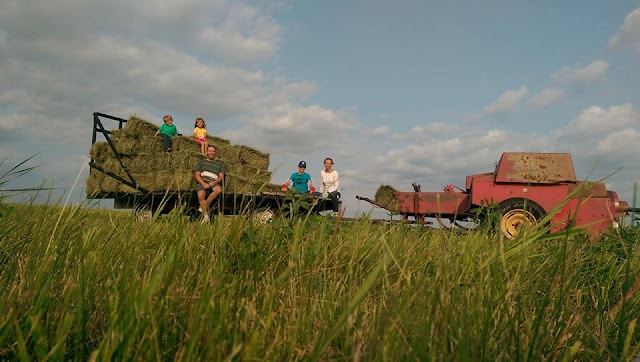 My husband and I have a 20-acre hay field we cut and bale ourselves. In previous years we used an ancient small square baler with a hay rack towed behind. I would stack the bales as they came out of the baler and then we would unload and restack in the hay shed. Our field makes about +/-900 bales and the waggon holds about 90 bales so that was a LOT of stacking. To help ourselves manage this, we would cut smaller sections and do it over the summer rather than all at once. Add in a full-time typing job and my tendinitis issues with my hands have made this a dreaded process.

Last year we decided to buy a round baler (not ideal for horses to eat from round bales, I know, but I planned to fork off hay to them from the round bale rather than let them eat directly from it to avoid the dust issue). The baler we bought however was terrible with many parts not working properly. It made horrible bales and we ended up making as many small squares as we could before finishing up the field with the round baler.

This year haying started off with braking the square baler, then fixing it, then braking it again. Then switching to the round baler wherein we broke that too. Then fixing the square baler (still working--knock on wood) and buying a new round baler. We have done one 'trial' section of rounds with it and so far it is wonderful! The baler is much easier to operate and makes fantastic bales, so fingers crossed we do not kill this one too. Our back yard is starting to look like a farm machinery graveyard. 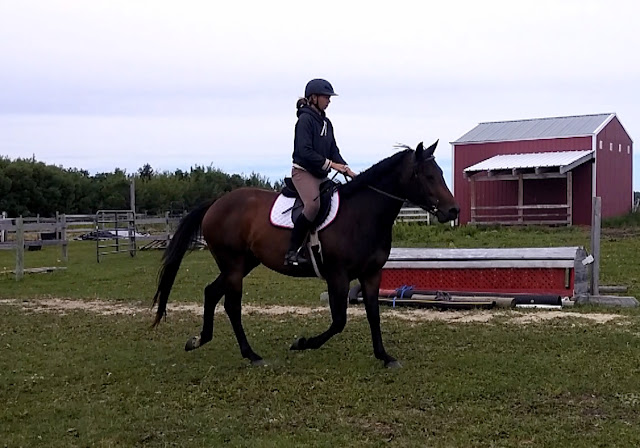 I have snuck in short rides here and there, mostly on Shiraz and also convinced the kids to ride a few times. Shiraz has been coming along so nicely this summer and the progress is really fun right now. Every time I get on her, she seems noticeably better than the last time. I have started to introduce leg yields at walk and trot and although she is no where near as laterally talented as Savvy, she is getting it and improving every time. 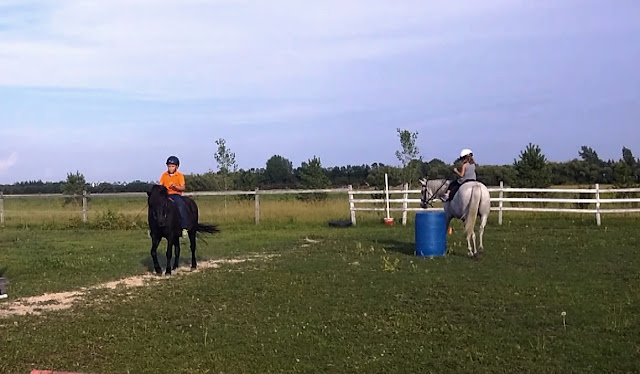 Savvy has shown she is starting to be a great kidlet packer too and tolerates carrying around a tiny (but bossy) little girl and doing her best not to pass out from boredom.

﻿
Meyla has also been introduced to a riding crop by his determined little rider, and the idea of 'keep moving forward" has greatly improved.

Mostly though, we have been enjoying summer and trying to take it easy when we can. Hopefully this new round baler will help future summers be less work, more play for us all.
Posted by LandofWOZ at 11:34