My farm has not sold yet so for the time being I'm not going anywhere. We have done everything we can to the house to prepare for selling, but as for how the yard looks, it is a waiting game for snow to melt (the back yard is still a couple feet deep in snow currently). But a certain fluffy yak has packed her little grooming bags and relocated. 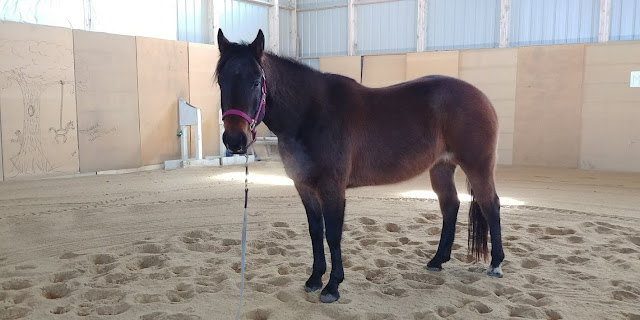 The best part of this whole new adventure is having Shiraz at a boarding stable with an indoor -- and that has happened this past weekend! I brought her on Sunday, lunged in the arena and showed her all the things, then lunged again on Monday.

Tuesday I had scheduled a lesson with my coach K from the previous indoor I had been trailering to. She was gracious enough to agree to drive over to the new place and continue our lessons. It possibly may have been a bit ambitious to schedule a lesson that soon, but I wanted to hit the ground running and make up for a failed winter plan of making progress with Shiraz.

I was a bit worried how she might be for her first ride in the new arena with sounds of construction of the new barn being worked on. To make matters a bit worse I showed up late and literally was running to get my horse, scrape of the mud and tack up. I lunged a little in a rush and then jokingly made a prayer to the riding gods to keep me alive for this lesson.

Turns out that prayer deserved a bit of sincerity. Shiraz was tense and could not mentally comprehend how to step forward in that state. Rearing felt strongly imminent. K had us just work on a 20-meter circle at the walk which once I got her unstuck from where I had mounted it was a pretty intense jig. We worked on trying to find a walk and K had me count out loud "1,2,3,4" over and over and K threw every tool she knew at us to help us both relax. At one point some random person opened the arena door without calling out first and spooked us both hard: Shiraz did this very gymnastic move and I yelled a swear word, and the poor guy looked a bit shellshocked (ohmygod I need to stop with the swearing with spooks! Perhaps I can train myself a random word for those surprise moments like..."CABBAGE!" or "UKULELE!").

Finding a true walk was just not happening so K had us go up to trot and still counting out loud. There was much tail swishing, head snaking and pinned ears in response to my leg. K had me "forget my hands" and just ride her with my legs and seat. I literally was to put my hands on her neck and not use the reins for anything (although I had contact). This was the magic feather for me and I settled in to thinking in the moment.


It was incredibly cool to see that I could settle her head movements with my legs. Every time Shiraz wanted to suck back, or drift to the exit, or throw her head around in a fit, it was completely fixable with inside leg, outside hip bone and eyes focused on the next spot in the circle. Bit by bit I could feel her back unknotting and I allowed the reins to lengthen until she was trotting with her head stretched down and she started breathing. This state took 45 minutes to get and I am so happy to say that I spent most of the ride completely relaxed (except for that first 10 minutes of jiggidy jig--that space right there I was certain we were all going to die). 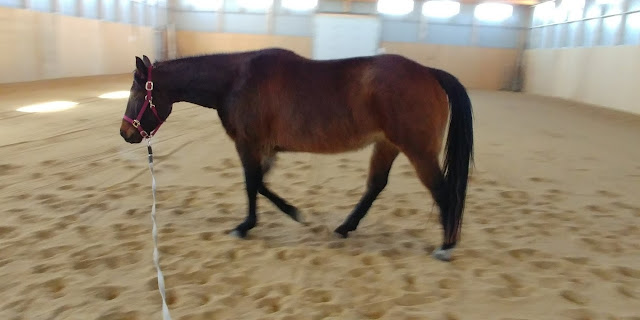 It was a great lesson--yes we just trotted a 20-meter circle basically for an hour but there was a lot accomplished. Shiraz was throwing every doubt question at me and with K's help I was able to answer all of those questions plus show her that dirty threats (like telling me she wanted to rear or buck many times) were not an option. And the best part, it was done with soft but consistent focus and leg support rather than a harsher correction.

I am looking forward to my next ride on my own. I will definitely be spending a lot more time doing ground work before I get on so hopefully she will not be that tense for the next ride. But, even if she is, I think we'll be okay.