Some decisions just weigh on you. When I finally decided to look for help with Shiraz in her training, at first I was excited but that all soon was replaced with worry.


First of all, would she be mistreated when I was not there? This is a huge fear knowing that there are trainers in my area that are known for things I would never approve of - such as tying a horse's head to a stirrup and leaving them for hours like that. Some trainers are happy to tell you their training plan while others omit parts for obvious reasons. At the end of the day, no matter how many questions you ask and referrals you get, you can't know what a trainer does when no one is looking.

Second, would she actually be able to learn much in just two weeks? Really, my initial excitement was quickly replaced with "what if I just wasted $$$ and I still can't canter her?" Even if she comes home having cantered just fine with the trainer, would I then ruin it with not being able to ride enough days of the week to keep it up, or what if I still did not have the courage to ask for canter regardless?


You can see I kind of tend to worry a lot. But in my defence I really care a great deal about this horse and I have big plans for the two of us next year.
So, how did it go? Against all the odds that I had come up with in my head, things went great! 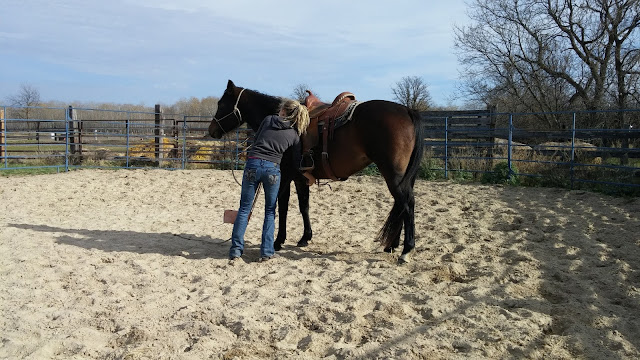 During the two weeks I visited her as much as I could just to spend some time brushing her and shoving treats in her face. Shiraz adjusted very well (quite instantly being totally fine with the two other horses) and made it the entire two weeks without a scratch on her. I was able to watch two training rides; one at the end of the first week and then again half way through the second week.


Even though Shiraz had already had a lot of ground work done with her as well as riding walk/trot, the trainer started from scratch with ground work that sounded along the lines of Buck Brannaman style and then began riding first in a western saddle and working in the round pen. She switched to an English saddle at the end of week one and moved to the large arena as well as took Shiraz on trail rides through ditches, along roads and fields a few times.

When I brought her home, I gave her the day to settle back in. She looked frankly overjoyed to be home. She galloped/ate/galloped for a large portion of the afternoon. The next day I could not wait to get out and ride and see how she would be. My arena is a sloppy, muddy mess so I had to take her out to the hay field.
There was no slipping on the lunge line out there so I hopped on and trotted circles for like what seemed forever. She was up and fast but had a much better ability to bend than when she had left for training. She wanted to keep a very close eye on her buddies back at the paddock but otherwise was behaving well. Finally I asked for canter and just with one kiss she gently lifted into a lazy western lope. I changed directions and tried the other lead which went just as well.
Yyyaaasss!!!!
And now all the plans can begin. I have two options for training moving forward:
1.  I can begin lessons with my coach from last year at the huge heated indoor.
Pros:
Great coach that I found very helpful with Savvy last year.
Amazing, huge, heated arena with tons of room to work even when other people are riding.
Cons:
A bit farther than I like to trailer on a weekly basis.
Pricey. I can only afford a lesson every second week, but could still trailer over and ride on my own the off weeks.
2.  I can start lessons with this trainer who worked on Shiraz.
Pros:
I bit closer; would shave off 10 minutes each way.
More affordable. Possibly could afford a lesson every week.
Cons:
Unknown territory for coaching style.
No idea what arena is like or what equipment will be available (for when we start jumping!).
Usually money wins with me, but I had a very good experience with my coach from last year, so I am still not sure. Now that winter has shown up and my riding arena is not usable, I feel the pressure to hurry up and get something arranged.
Some days (mostly winter days) I wish I boarded my horses at a barn with an indoor...(sigh).
﻿
Posted by LandofWOZ at 10:39