The show on Saturday had such a great atmosphere. It was well organised and attended. We were all warm inside out of the snow storm and all of my classes were pretty much back to back so no need to go out in the snow until I was done for the day. Savvy was relaxed and I was having a blast!

I wanted to give Savvy more experience and exposure to fences and schooling shows are the perfect place for it. No pressure, affordable fun for all.

My cross rails class had an unfortunate refusal but because I was able to try again right away and ride more effectively, I was feeling optimistic about my 2' vertical classes that were yet to come.

When the rails went up, so did the number of riders coming into the arena. There had only been six of us in ground poles and cross rails. Now there were at least another ten horses added to the mix so I was feeling pretty sure I was out of the ribbons regardless of how it would go. 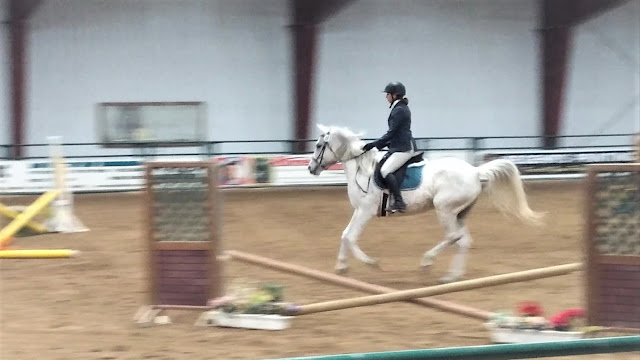 When it was my turn to go, I committed to canter and kept in mind that coming away from the gate would need a lot more encouragement as she was sluggish heading away from it in the cross rails class. It worked on the turn to fence #2 this time and I did not lose her canter as I had last time. I was not able to keep her straight though, landing left and then having to fix things and regain forward pace coming to #3. The fourth fence was easy coming home but then it took a lot of leg to keep enough forward pace for #5 and 6. I was a bit worried about her stopping at these as they had moved the hay bales under the jump and if I came in too soft, Savvy might decide to stop at this one. We made it though and carried on to finish up nicely.

It was pretty much the most awesome round I might have ever had as an adult ammi!!!!!

There is so much to work on and I have a lot to learn. But. That feeling was my answer to the question of why I put myself through all this.

I wanted to quit there. Don't tempt fate. Take awesome and run like hell.

But with a little encouragement from others, I decided to try the 2' stakes class which was next.

Unfortunately the course changed and I worried about a fence we had not done in warmup or in the previous classes. And we had a refusal. Well, three refusals. Fourth time was the charm though and that is where I called it a day.


Savvy got to head back to the barn to cool off and have some lunch and I headed back to watch some of the show before going home. When I got there, they were announcing winners of the 2' vertical round. I actually got 2nd!!

The other ribbons are awesome and fun to get, but this particular one means a lot to me. Hopefully it is just the beginning of a pretty great year with this horse.

In two weeks we have our first derby. FIRST EVER XC. I think it is time to take this pony to the park!
Posted by LandofWOZ at 12:13