We are knee deep into one of the most wonderful Novembers I can ever recall. It is made even more sweet by the fact that the past few weeks have been cold and rainy.

Saturday was just perfect! Not a bit of wind, sunny and warm. Who could resist some much needed horse time?

Shiraz has been in very casual training over this past summer. She is still actively growing so I am trying to resist too much riding time on her just yet. But, I really want to establish some solid basics into her right now because she has been litterally a sponge for learning and I do not want to 'miss the boat' so to speak. Holding off training for bones to finish growing is so important, but there is also a window of opportunity with a really young horse to set them up as solid citizens that I don't want to miss. 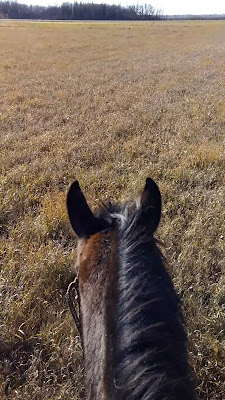 My arena was still too wet on Saturday to work in so I headed out the hay field with Shiraz. I did some lunge work and then enlisted my oldest son to lunge me while I worked on some trotting with her.

After that, I headed out with Shiraz for a mini trail ride in the field. She was so well behaved! I could feel her top line relax and her strides lengthen. At one point a rabbit jumped out of the grass about 50 feet away. We both flinched, but Shiraz recovered instantly and I could feel her back relax again in a couple of strides. I was so impressed with her for her first time being ridden out like that.

Later that evening I was sent a message that a group I was considering joining was meeting for a trail ride/pot luck in the park the next day. They are a drill team that travels to different events to perform. I was invited to join a few months back while my friend and I were at a social. There may have been too much alcohol involved. The next day I had received a text that I was now a part of the drill team...

I certainly didn't feel Savvy was prepared for a trail ride. One, she had not been ridden in a few weeks because of her abscess and then bad weather. Second, I have never taken her on a trail ride yet (besides my open hay field at home) and I was not sure how she would be.

After much support from many people telling me to go, I met up with the group at the park. Savvy was well behaved but a little perplexed as to where I had taken her. 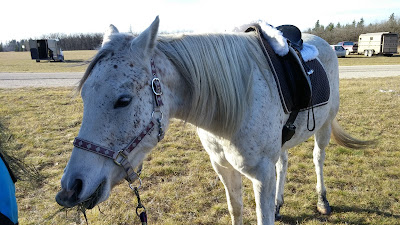 We all saddled up and headed out to the trail. As we walked across the field with the other horses, Savvy was fabulous. Once we got to the start of the trail, however, Savvy's mind was officially blown. You see, we have no trees at home aside from one strip of wind break that is not part of Savvy's pasture. This was her first time stepping hoof into forest and lets just say she was overwhelmed! Everything was new to her from the leaves crunching under hooves to the branches reaching out on all sides, roots to step over and rocks thrown in as well simply to finish her off if she wasn't already sure to die.

The entire way she jigged, but not once did she spook which was encredible considering how scared she was. We made our way through the forest to the equestrian centre in the park and then used one of the out door arenas to practice the drill pattern. Once Savvy was 'safely' inside the arena she let out massive sighs and shook out all her tension. Now she slipped into lazy arena pony mode which I found hilarious and we set to trying to keep up with the group and learn the pattern.

We took the same trail back with mostly jigging again, but some moments of relaxing (becasue she was just so tired!) and made it safely back to the trailers for much deserved bevies and snacks.